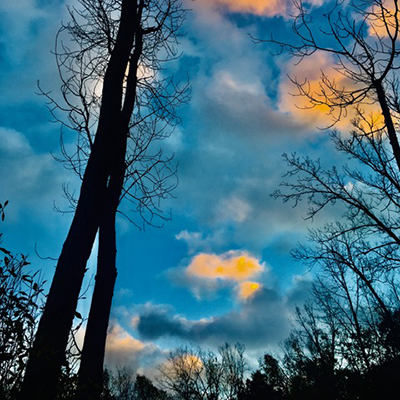 I used to take my evening walks across town, but now I stay away from campus because college students have proven to be as bad at spreading the virus as ultra conservatives.  Instead I walk through neighborhoods where I’m less likely to see other people. I choose to live a lifestyle that is a bit more isolated, since I have much more experience dealing with isolation than dealing with a dangerous virus.

Although feeling lonely is a very common human experience, people still seem reluctant to talk about it.  It’s kind of the opposite of being busy.  For example, if you ask a busy person how he is doing, he usually won’t be shy to go into detail about how busy he is.  Maybe this is because busy people tend to feel wanted and lonely people tend to feel unwanted.  Of course, just because you feel unwanted that doesn’t mean that it’s actually true.  There are plenty of loveable people who end up feeling like they are on an island by themselves.  Some people choose island life because they think it will be simpler and safer; others find that island life chooses them as a result of some kind of loss.

One of the challenges of growing older is that you have to say more goodbyes—both to loved ones and to pets. I keep thinking that a breeder is going to figure out a way to make dogs live longer, since it can be so sad to have to say goodbye to a canine companion. I used to see a guy in the woods with Irish wolfhounds that lived only about six years.  Needless to say, an existential ponderer like myself would not be a good Irish wolfhound owner.  I would either be getting over the last one that died or be thinking about when I was going to lose the next one. Who knows? Maybe there would be sweet spot where I wouldn’t be thinking about the death of my Irish wolfhounds at all.

I still think it is better that we outlive our dogs than the other way around.  I wouldn’t want to have a dog that lived as long as a parrot or tortoise, because it would be much harder for a dog to get another owner than it is for an owner to get another dog. I’m not quite sure how I started talking about isolation and ended up talking about dogs.  I guess my dog enriches my life and makes me feel like a part of a small pack. When I was single, I used to think that loneliness was something that only single people felt, but I’ve come to appreciate that not all loneliness is related to romantic companionship or the lack of it.

Some of it can also be related to a need for belonging.

I think that the last four years have felt lonely for a lot of Americans because we haven’t felt like we belonged in our own country.  I have kidded my wife on several occasions to practice her French because we were moving to Montreal.  While I love Montreal, I don’t know if I would feel at home there with everyone speaking French and eating fries with gravy and talking about their hockey team, the Canadians. I would much rather improve the conditions in my own country than find a new place to live.  What’s tricky is that what feels like improvement for me might not feel that way for other Americans.  It’s not my nature to seek happiness at the expense of someone else’s unhappiness, and yet I don’t think this last election was about anyone’s individual happiness.  It was more about rebuilding a homeland where more people could feel at home.